Skip to Content
Home Photography Postcard from Switzerland
by 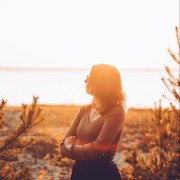 When you think of Switzerland the first thing that usually pops in your head is cheese, chocolate, army knives, clocks and the the Toblerone mountain. The country itself is actually a massive post card, with amazing views every corner you turn. To say the least, while traveling there I wanted to stop like 10000000 times just to take a picture, but sadly there weren´t many options for that on the swiss highway. It is one of the most expensive countries in Europe and a lot of travelers will avoid it for the reason of it being too costly. I can say that yes, it was super costly, but we managed to visit the country without a huge budget although it definitely wasn´t a budget trip.

Going back to the story side, I had always dreamed of visiting Switzerland and seeing those amazing mountain peaks and experiencing the culture. Honestly 5 years ago I would have not imagined going hiking in the mountains in Switzerland. My hiking and mountain addiction actually started a few years back when I started exploring more of the Estonian hiking landscape, but soon felt that I wanted to explore more. The first real mountain hiking experience I got from the Italian Dolomites. There we spent like 2 days and I completely fell in love with it. Even then I would have never though that I would be crazy enough to pack my bag and go to Switzerland to hike in the mountains.

The excursion actually started off in Milan, Italy where we rented a car because it was cheaper than in Switzerland. Also, we had plans on staying in Italy for the last 2 days of our trip, but that´s a different story. Going back to Switzerland, the drive across the border was surprisingly chill as I was ready with passports, covid certificates and everything, but the guy at the border just waved us in so that was smooth. The big thing that you need to consider when driving on Swiss roads is that you probably need a vignette to drive on most highways. It cost like 50€, but was valid for a full year (unfortunately no vignettes for shorter periods). I will break the costs down in a different post if you´re interested so you have an idea how much it actually costs. When I tell you that even before entering the county the mountains were amazing. In the country the amazement continued and I just had to pick my jaw off the floor so many times. The first official day we actually spent on traveling and getting to Interlaken, we stayed in a hostel in the heart of Interlaken. We luckily had some time to walk around the area and see the city a bit and just got ready for the next days hike.

The next day we got to hike around the famous blue lake of Oeschinensee. There are 2 ways you can hike: the lake side one is 4km, so it´s not very steep or difficult and the 8km panoramic loop that was recommended to us. Honestly, it´s absolutely worth it. The hike itself was quite hard if you´re not used to high elevations and climbing up steep hillsides. Thanks to the fact that we started the hike as soon as the gondola opened, we managed to beat the crowds. As we later found out, it is a very popular hiking spot. If you plan to go see the blue lagoon lake definitely be ready to have people there during the high season especially.

The second day we mostly spent driving to Saint Gallen, but we managed to see the tallest free falling waterfall in Switzerland, sadly we arrived a bit too late so we had like 45 minutes up on top of the waterfall. The idea was actually to climb down to the middle and take some amazing photos there, but sadly it would have taken a lot longer than 45minutes. After getting down again with the last gondola, we decided to just walk to the lower part of the falls quite near the gondola station. A magnificent site to be honest, the photos will never give the full magnitude of the falls itself. Because the day was not used for much, we decided to go see the Instagram famous abandoned Swiss hotel. It´s located besides a long curvy road, driving there was an adventure itself already. The hotel was a bit underwhelming, I guess that´s just the magic of social media.

The next days adventures took us to see another famous waterfall in Switzerland, Staubbachfälle. It’s located inside the city of Grindelwald and if you find the right viewpoint, you can actually capture the city and the falls in one picture. Sadly this time I did not have time to do that. Hopefully the next time I will find my way to that spot. The days highlight was actually our hike that took us to some quite scary hiking parts, but as I found out later, those were actually the easier parts of the hike. The whole hike would have taken us the entire day and we felt we weren’t yet that experienced in hiking and had wrong hiking shoes on anyways. We met a couple on the way up with the gondola that shared some cool stories and gave us recommendations on where to go. The hike itself was scary at times, but also very beautiful! I think it was only like 4km, but we saw some amazing mountain peaks and managed to spot some native wild flowers. After the hike we had some local beer on top of the mountain with some amazing views.

The next day we had our last hike in Switzerland and oh boy was it difficult. The plan was to spend the entire day hiking and having some food in the mountain huts and actually hike down the mountain instead of using the gondola. I think we underestimated the elevation of the mountain when we took up the plan as it was a lot harder than we had expected. The first part we hiked up from the Gondola station to our first mountain hut and viewpoint. As the tradition continued, we had a beer on top of the mountain at the hut and enjoyed some amazing views.

I got to be honest, the way down from the mountain hut was soo much easier and we got to enjoy it a bit more, not only huff and puff because the air is so thin and I´m not a local who can hike every day. Still no regrets on the idea to hike up. The hike down was the same, but I think I stopped more for the sheep, cows and goats so the walk took the same amount of time back to the gondola station. When we reached the Gondola station, we started the trek down to our next stop which was a quite famous restaurant that is built to the side of the mountain. That was actually the easy part of the downhill hike, but I will get to it soon. This restaurant was soo cool! It´s literally built into the mountain side and it was quite popular as well. We managed to get a table that we shared with some very nice Germans. We enjoyed some local cheese pie and a cocktail and just took a longer break to rest. Good thing that we took a break because the trek down was very very very steep, like I would have not thought how hard it is to climb down. On our way down we some German pensioners so we had to keep going not to be slower than them. Our next break was by this amazing lake, the views were postcard material and my legs were so tired that I was happy to be on a bit of flat land for a bit.

After our small break we continued a quite uneventful decline down, the weather slowly slowly started to turn bad and the rainclouds started to roll in, so we picked up the pace. We we got down after like 45 minutes of walking, the clouds had turned dark and it seemed like there was going to be a thunderstorm. I was right, like 10 minutes into our dive we got hit with a very bad storm, it was baaaad, but thankfully we managed to get to our hotel in one piece.

The day after our full day hike we spent driving back to Italy through Liechtenstein to stop and tick the country off the bucketlist and through Austria to get back to Italian dolomites.

Even though I said it´s a story about Switzerland we still did a 2 day stop in the Italian dolomites. We visited the famous church that has the most beautiful backdrop of the mountains, stayed in a very cute mountain hotel run by the nicest family. We managed to spend one day in Seceda as well, the mountain peaks were honestly amazing. We were above the clouds and saw the clouds roll over the mountain peaks. The hike itself was quite challenging, but that may be because we had hiked 4days out of 7 and our legs were not working like they used to. The fun part of this story comes when we decided it was time to pack up and start going down because the weather was turning bad and there seemed to be a storm rolling in. We got to the gondola station and found out that we were stuck in the mountains for the time being. Because of the storm it wasn’t safe to go down as there was lightning and a lot of rain. So we managed to get a table in the mountain hut and had some cake and cocktails. Thankfully we had good company so the time we were stuck went by fast and soon we were going down with the cable car again. The best part was that the weather below the mountains was sunny and warm. That´s a sign to be always ready for anything in the mountains.

That´s pretty much it for this adventure, it´s been a while since the trip so my memories are a bit foggy. My writing might not be the best because I haven’t written anything in like months thanks to my creative block, but today I felt like wanting to get this trip down and maybe inspire someone. Hope you enjoyed this little story, hopefully I can write about some new travels that are coming up, like Vienna and Budapest, so be ready for that!

Remember to pin for later!

This site uses Akismet to reduce spam. Learn how your comment data is processed.